My Sous Chef Takes Over For the Night

I had planned on chicken all week for dinners, but I had also taken out some pork chops to make for dinner one night. I thought tonight would be a good night to do that and I thought it would be an even better night to have Sean take over in the kitchen. He is planning on taking a cooking class later on this summer so I figured tonight would be a good night for him to do some of the cooking while I just supervised. He chose this recipe of skillet barbecued pork chops as his first test. You don’t have to do the brining of the pork chops if you don’t have time to do it, but it does help to add to the meal by making the pork chops more moist.

For the spice rub:

Dissolve the salt in 2 quarts of cold water in a large bowl or container. Submerge the chops in the brine, cover with plastic wrap and refrigerate for 30 minutes.

For the spice rub, combine all the spices in a small bowl. Measure 2 teaspoons of the mixture into a medium bowl and set aside for the sauce. Transfer the remaining spice rub to a large plate. For the sauce, whisk the ingredients in the bowl with the reserved spice mixture until thoroughly combined; set aside.

Remove the chops from the brine, rinse and pat dry with paper towels. Use a sharp knife to cut 2 slits, about 2 inches apart, through the outer layer of fat and silver skin of each chop (don’t cut into the meat of the chops). Coat both sides of the chops with the spice rub, pressing gently so the rub adheres. Shake off the excess rub.

Heat 1 tablespoon of the oil in a large nonstick skillet over medium heat until just smoking. Place the chops in the skillet in a pinwheel pattern, with the ribs pointing toward the center, and cook until browned and charred in spots, 5 to 8 minutes. Flip the chops and continue to cook until the second side is browned and the center of the chops registers 130 degrees on an instant read thermometer, 4 to 8 minutes. Remove the skillet from the heat and transfer the chops to a plate. Lightly brush the top of each chop with 2 teaspoons of the sauce.

Wipe the pan out with paper towels and return it to medium heat. Add the remaining 1 teaspoon of oil and heat until just smoking. Add the chops to the pan, sauce side down, and cook without moving them until the sauce has caramelized and charred in spots, about 1 minute. While cooking, lightly brush the top of each chop with 2 more teaspoons of sauce. Flip the chops and cook until the second side is charred and caramelized and the center of the chops registers 140 to 145 degrees on an instant read thermometer, 1 to 2 minutes.

Transfer the chops back to the plate, cover loosely with foil, and let rest until the center of the chops registers 150 degrees on an instant read thermometer, about 5 minutes. Meanwhile, add the remaining sauce to the pan and cook over medium heat, scraping up any browned bits, until thickened and it measures 2/3 cup, about 3 minutes. Brush each chop with 1 tablespoon of the sauce and serve, passing the remaining sauce separately.

Sean handled most of the prep and the actual cooking pretty well. The only thing I really did was take the chops out of the pan. He also made some oven roasted potatoes, corn on the cob and skillet cornbread to go along with the meal. Again, he did most of the work himself, including the chopping of the potatoes, mixing everything for the sauce, the rub and the cornbread. All I handled was the hot cast iron skillet for the cornbread. I have to say I was quite proud of how well he did with everything. Now if I could just get him to clean his room, all would be wonderful!

That’s it for tonight. It might be back to chicken tomorrow night, or maybe some burgers, i haven’t quite decided yet. We’ll see what I feel like doing. Enjoy the rest of your evening and enjoy your meal! 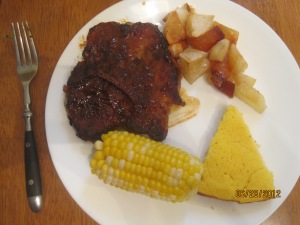