Okay, here is the last of the snacks I made this past week. This one also comes from Kelsey Nixon of the Cooking Channel and is for pork dumplings. Sean has been asking me to make these for quite a while now and I finally had some ground pork and wonton wrappers on hand so I thought I would give it a try. There are only a few ingredients to these and they are very simple to make as an easy snack or appetizer if you are planning an Asian-style meal for dinner or just feel like having some kind of a snack.

For the Pork Dumplings:

For the Dipping Sauce:

For the dipping sauce, combine the soy sauce, Sriracha and lemon juice in a bowl and set the sauce aside until you are ready to serve the dumplings.

For the pork dumplings, heat a large nonstick skillet over medium-high heat. Add the garlic, ginger, sesame oil and scallions and cook until the mixture is fragrant, about 1 to 2 minutes. Remove the skillet from the heat and allow the mixture to cool for about 1 minute.

Combine the cooked garlic, ginger and scallions with the ground pork, hoisin sauce, soy sauce, Chinese five-spice powder and the egg in a large bowl.

Heat the vegetable oil over high heat in a large nonstick skillet. Working in batches, pan fry the dumplings by placing them bottom-side down and frying them until they are golden brown, about 1 to 2 minutes.

I can tell you that this recipe makes a lot of dumplings, so you can certainly freeze them and heat them up any time you want to have a little snack. We all enjoyed the dumplings as they had some great flavor with the ginger, scallions and hoisin sauce. They were pretty easy to make and while the recipe calls for round dumpling wrappers, i only had square wonton wrappers and I think they worked out just fine for my purposes. It is a perfect party snack you can make pretty easily and I think you could substitute out the pork for beef, chicken, turkey, shrimp or even just vegetables and get great results.

That’s all I have for today. Check back next time for another recipe. I have some other great recipes we have tried lately and I still have my recipes I am making on Valentine’s Day this year to share as well. Until next time, enjoy the rest of your day and enjoy your meal! 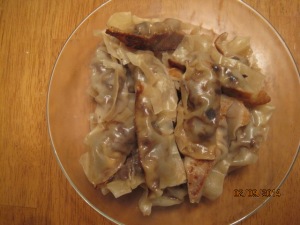