Feeling Fancy on a Weeknight – Pork Tenderloin with Balsamic Raspberries

I know most people want something that does not take much effort on a weeknight. You’re tired after a long day at work and the last thing you want to, especially in the summertime, is spend a long time in the kitchen in front of the stove making dinner. I feel the same way; there are just some nights where you don’t want to do it. The great thing is that there are so many good recipes out there that you can do in under 30 minutes and have a really nice meal on the table without working up a big sweat in the kitchen. All it takes is a little bit of planning on your part each day or at the start of each week so you can be sure you have all of the ingredients on hand. Then you can crank out your dinner and have it on the table fast. A great example of a dinner that looks fancy but takes no time at all is this one from Food Republic for pork tenderloin with balsamic raspberries. It is an elegant looking dish that you can have on the table in about 30 minutes.

2 pork tenderloins (about 3/4 pound each)

Preheat the oven to 375 degrees, with a rack in the middle position. Rub the pork tenderloins with the olive oil and sprinkle each tenderloin with salt and pepper.

Melt 2 tablespoons of the butter in a large skillet and brown the pork on all sides, about 4 to 5 minutes. Place the pork on a rack in a roasting pan and roast it for about 10 to 12 minutes; an instant-read thermometer inserted into the center should read 140 degrees. Remove the tenderloins from the oven and let the meat rest on a cutting board for 5 minutes.

Meanwhile, melt the remaining 1 tablespoon of butter in a small saucepan set over medium heat and cook the shallots, stirring, until they are soft, about 2 to 3 minutes.Stir in the balsamic vinegar, the sugar and 1/2 teaspoon of salt and simmer until the sauce starts to thicken, about 10 minutes.

Cut the meat into slices and serve with the warm balsamic raspberries.

It is a very simple dinner to make but it looks pretty fancy when you get it all on the plate. You get a really nice sauce with the vinegar and raspberries and we all loved the flavor the sauce provided to the pork. You could use the sauce pretty successfully with other cuts of pork if you prefer, like boneless cutlets or chops or even bone-in chops. I served the pork with some Brussels sprouts and roasted potatoes, but you can make it really easy on yourself and just put it together with some rice and a salad or a baked potato and salad and have everything ready to go. Anytime you can get a main dish done in about 25 minutes and have it look fancy and taste awesome is a pretty good deal to me.

Even though the weather has taken a decidedly chillier turn in the last few days here even though it is spring, I had been in the mood for something a little more tropical, at least as far as dinner. I have actually picked up a bunch of different pieces of pork over the last few days as they were having a sale so I was able to get pork tenderloin, a pork loin roast and some center cut pork chops at a really good price so I wanted to make something that would be a little spicy a different from what we usually have when it comes to pork tenderloin. I had recently seen a recipe in Cook’s Country for a jerk pork tenderloin with arugula and pineapple salad. The recipe sounded quite delicious and the ingredients for pretty basic, though I did not have any arugula in the house but I did happen to have some spinach on hand that I could use as a replacement. So I set about making this recipe for dinner so that we could have a little bit of a Caribbean flair even though it was only 45° outside.

Heat the remaining 1 tablespoon vegetable oil in the now-empty skillet set over medium-high heat until the oil is shimmering. Add the pineapple pieces, red onion, orange juice, cayenne pepper, and the remaining 1 tablespoon of the jerk seasoning and cook, scraping up any browned bits, until the onion is just softened, about 3 to 4 minutes. Off the heat, stir in the baby spinach. Season the mixture with salt and pepper to taste. Slice the pork tenderloins, transfer the slices to a platter, and top the pork with the pineapple mixture.

This is another great simple recipe from Cook’s Country that you can have completed in under 30 minutes and with just a few ingredients. The pork had great spice flavor from the jerk seasoning and you can use any seasoning you like to flavor the pork. Personally, I used the Island Jerk Rub that is from Pepper Mary and it had just the right amounts of spice to it and some great heat and it also helped to make a really good crust on the outside of the pork. I really enjoyed the mix of the pineapple with the arugula and it made a nice touch on top of the pork. The sauce that was created from the pineapple and the orange juice was not overly sweet and thickened to a nice consistency. In my opinion, pineapple goes really well with pork so it made a perfect addition to the dish. I think the spinach worked out just as well as the arugula might have and Sean actually enjoyed having the spinach they are instead of the peppery flavor that arugula often has. It is certainly a recipe worth remembering if you want a nice, spicy dish that you can make quickly during the week.

That’s all I have for today. Check back next time for another recipe. Until then, enjoy the rest of your day, and enjoy your meal! 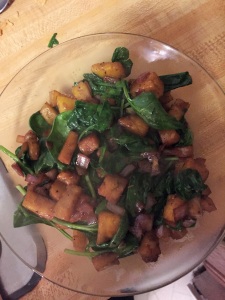 Quick weeknight meals have been becoming more and more important around here lately. With Michelle away on business or working late, Sean’s schoolwork and involvement in the school play and my work it has been a crunch to try to get a meal on the table some nights. That means I have been turning more and more to quick and easy ideas for dinner that I can put together in under 40 minutes so we can eat at a reasonable time and not have to turn to fast food or convenience food too often. I do try to mix things up so we’re not eating the same things all of the time (Sean does tend to complain if we are eating too much chicken). I had picked up a pork tenderloin at the store on sale a few days ago and then I saw this recipe on Epicurious for pork tenderloin with date and cilantro relish that sounded tasty and different. it only has a few ingredients to it and can come together in under 45 minutes, so I thought I would give it a try.

Preheat the oven to 425 degrees. Heat 1 tablespoon of the olive oil in a large ovenproof skillet or cast iron pan over medium-high heat. Season the pork tenderloin with salt and pepper and place it in the skillet and cook, turning the tenderloin occasionally until it is browned on all sides, about 6 to 8 minutes. Transfer the skillet to the oven tenderloin until the temperature of the pork registers 140 degrees on an instant-read thermometer inserted into the thickest portion of the tenderloin, about 12 to 15 minutes. Transfer the pork to a cutting board and allow the tenderloin to rest for at least 5 minutes before slicing it. Set aside the pan drippings from the skillet.

Toss the dates, orange juice, reserved pan drippings, 3 tablespoons of the chopped cilantro and the remaining 2 tablespoons of the olive oil together in a small bowl. Season the mixture with salt and pepper to taste. Spoon the relish over the pork slices and top with the cilantro leaves.

I did make a small change to the recipe as I went along. It seemed to me that the dish needed a little extra crunch so I added a sliced carrot to the skillet along with some pearl onions with the pork and cooked them in the oven as well. Both vegetables picked up some of the juices from the pork and seem to add a nice touch to the relish as well in terms of color and flavor. I have to admit I do not have a lot of experience using dates or cooking with them, and Sean seemed to shy away from them in the dish, but I really enjoyed the flavor they added overall to the relish and it went really nicely with the pork. I did notice in reviews of the recipe that some people added things like cranberries or walnuts to the relish as well to give it some extra flavor and take some of the sweetness of the dates. I think if you didn’t want to use dates you could easily use prunes or even grapes as a replacement and it would work just as well. I served this with some broccoli and white rice and it was a nice meal that was done quickly with easy clean up.