Romance in the Air and On the Plate, Part 1 – Roasted Beet Salad

Even though the weather around here has been absolutely atrocious this week, I had planned Valentine’s Day dinner late last week, of the ingredients I needed last week or early in the week and I was completely prepared to make everything. I even put extra hours of work in so I could be sure I had enough time to cook everything and spent the better part of the afternoon preparing everything. We had a nice, elegant meal for the three of us, something we do not do too often and it tasted great and was fun. I’ll be sharing the recipes I made over the next several days, so we may as well start off with the salad. The original thought for the recipe comes from Williams-Sonoma, but I actually ended up changing quite a bit of it because Michelle is not a big fan of a couple of the ingredients, so I did switch some things around for this roasted beet salad. I’ll give you the original recipe and then let you know what I did to change it around.

Preheat the oven to 350 degrees. Place the golden and red beets on a baking sheet. Coat the beets with 3 tablespoons of the olive oil and season them well with the kosher salt and black pepper. Cover the baking sheet with aluminum foil and roast until the beets are fork tender, about 1 hour. When the beets are cool enough to handle, peel the beets and cut them into 1-inch wedges.

Meanwhile, combine the lemon juice, creme fraiche, the remaining 5 tablespoons of olive oil, the dill and the shallots in the blended or food processor. Blend or emulsify the ingredients until they are well mixed and season the vinaigrette with kosher salt and pepper to taste.

Arrange the beet wedges in a layer on a platter and top them with the watercress. Garnish with the goat cheese and toasted walnuts. Drizzle the vinaigrette over the salad and serve.

Okay, looking back at this I made quite a few changes to the recipe. First, I could only find red beets in my area so that is what I used. I would have loved to have the golden ones too, but it just wasn’t happening this time. Next, I omitted the goat cheese and the toasted walnuts. Michelle doesn’t like either one of them so they both went out. I also couldn’t locate any creme fraiche in the area so I had to make my own using equal parts of sour cream and heavy cream and mixing them together. It turned out just fine and was perfect to use. Finally, I hated to waste the beet greens so I decided to use them in the salad with the watercress. One thing to not about beet greens – they are very dirty and need extensive washing and spinning in the salad spinner if you have one. Also, they can be quite bitter when they are raw so if you don’t like the bitter flavor you can try blanching them or even wilting them a little in a saute pan for a few minutes. They are too tasty to waste though and make a nice addition to the meal if you can use them. We all loved the beets and always forget how great roasted beets can taste. I really need to buy them more often to make them. I really enjoyed the dressing as well with the shallots and dill adding some great flavor and I can see how the goat cheese and walnuts would add a lot to this salad. It was good as we had it, but the additions would make it even better. The picture I took does not have the dressing on it yet and you can really only see the beets and beet greens so it doesn’t do it justice.

That’s all I have for today. Check back next time for the next part of the dinner menu. I’ll be going over the two sides we had with the meal – sautéed spinach with garlic and garlic-thyme smashed potatoes. Until next time, enjoy the rest of your day and enjoy your meal! 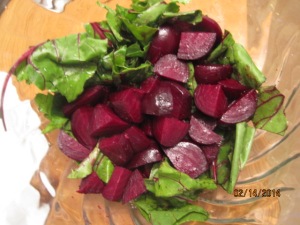 We had family over for dinner yesterday so we did our typical Sunday dinner with way too much food. We started off with appetizers of buffalo chicken pizza and some homemade guacamole and tomato salsa with some chips. Then for dinner, I tried to do everything in one roasting pan to help cut down on the clean up. We made a couple of roast chickens with roasted root vegetables that we had picked up at the farmer’s market on Saturday. This also included some fresh beets that I roasted and they turned out wonderful. The whole dinner was very easy to prepare, although it took about 2 hours in total to cook. I used recipes from Mark Bittman’s “How to Cook Everything” for the meal yesterday.

2 whole chickens, 3 to 4 pounds each, trimmed of excess fat

After roasting for another 10 minutes, the chicken breasts should begin to brown (if they don’t, wait a few more minutes until they are brown). Turn the heat in the oven down to 325 degrees, baste again with the remaining herb mixture, and roast until an instant read thermometer inserted into the thickest part of the thigh reads 155-165 degrees.

We served the chickens and vegetables with a fresh tomato and cucumber salad dressed with extra virgin olive oil, salt, pepper and a little diced shallot. You could just as easily only make one of the vegetables for this meal instead of the mix, but the mix turned out quite nice and gave us a good variety. I also made some fresh beets that I roasted with this meal. Now, not everyone is a fan of beets in general. I think some people were scarred in childhood by being forced into eating them, but fresh roasted beets taste unbelievably delicious. They have a very sweet flavor from their natural sugars, and once you have roasted them they are great hot or cold. Roasting them really is the best method for cooking them.

4 large beets, scrubbed, greens cut off (leave a bit of the greens on the end to help stop them from bleeding all over while they cook)

Heat the oven to 400 degrees. Wash the beets well. Wrap them individually in foil and put them on a cookie sheet or in a roasting pan. Bake, undisturbed for 45 to 90 minutes, until the thin blade of knife pierces one with a little resistance. Remove the beets from the foil and carefully and gently rub the surface of the beet to remove the peel. Dress lightly with extra virgin olive oil and salt and pepper.

If you bake them in foil, you don’t really have to worry about them staining anything (unless of course you drop a piece on your shirt while you’re eating. Thankfully, none of us did). You could also take the roasted beets, cut them and saute them gently with some butter or olive oil after roasting for some added flavor, but I think they are great just this way. Everyone seemed to really enjoy them, and I had leftovers tonight with dinner.

I decided to try something completely different for dessert last night. I had seen a recipe from Cook’s Country for something called Magic Strawberry Ice Cream. The name intrigued me so I read up on it and it claimed to make ice cream with the need of an ice cream machine or maker. I figured why not, let’s give it a try.

Process the strawberries in a food processor until smooth, about 30 seconds (puree should measure about 3/4 cup). Microwave the sweetened condensed milk, white chocolate chips and vodka in a large bowl until the chocolate melts, about 1 minute, whisking halfway through cooking. Whisk in the strawberry puree, vanilla and salt.

Using a stand mixer fitted with a whisk, whip the heavy cream on medium-low speed until foamy, about 1 minute. Increase the speed to high and whip until soft peaks form, 1 to 3 minutes. Whisk one-third of the whipped cream into the strawberry mixture, then gently fold in the remaining whipped cream, 1 scoop at a time, until combined. Freeze in an airtight container until firm, 6 hours or up to 2 weeks. Serve.

I know you are probably asking, why is there vodka in this recipe? Well the berries have a lot of moisture all on their own and the ice cream would crystallize and ice over. The vodka prevents this from happening and lets the berries do their thing. I have to say, I was very skeptical this would work but I could tell before I even combined the puree with the whipped cream that this was going to taste good. The puree itself smelled exactly like a good strawberry ice cream. Once everything was combined and had set, it was perfect and tasted awesome. What made it even better for us was that Michelle’s grandmother had unknowingly made a strawberry shortcake to bring for dessert, so it was absolute perfect with a little ice cream on the side.

Of course, if I was smart I would have taken pictures of everything, but Sean reminded me about after most of the ice cream was gone, so I didn’t get a picture of it (he’s actually finishing the ice cream right now). Oh well, maybe next time. Now that we know how easy it is to make, I’ll certainly make it again.

That’s it for tonight. I have 2 chicken carcasses to make stock with tomorrow and I never did get to make chicken salad sandwiches the other night, but maybe I will do that tomorrow and post the recipe with some potato salad and cole slaw. We’ll have to see what else comes along this week. Work has kept me very busy lately, so I haven’t had time to blog, but I will try to fit some in this week. Until then, enjoy your evening and enjoy your meal!

Posted by MikeG on August 6, 2012 in Cooking, Dessert, Poultry, Vegetables