Sean has been asking me to try to make my own pretzels for a while now. I had seen a bunch of recipes and I was always a little reluctant to try it. A lot of them seemed pretty time-consuming and called for a lot of space for rolling out dough, which I do not have. I finally came across one recipe that seemed easy enough to try. This one is from Chuck Hughes on the Cooking Channel and also includes a recipe for a cheese sauce. I personally didn’t make the cheese sauce, but I’ll include it here if you want something to go along with the pretzels.

3 cups flour, plus more for dusting

Combine the warm water, sugar and kosher salt in the bowl of a stand mixer and sprinkle the dry yeast on the top. Let the mixture sit until it begins to foam, about 5 minutes. Add the flour and butter. Using the dough hook attachment for the mixer, mix on low-speed until everything is well combined. Change the speed to medium and knead until the dough is smooth and pulls away from the sides of the bowl, about 5 minutes. You can also knead the dough by hand.

Remove the dough from the bowl, clean the bowl and then oil the bowl with the vegetable oil. Return the dough to the bowl, toss the dough so it gets oiled, and cover the bowl with plastic wrap and allow it to sit in a warm location until the dough has doubled in size, approximately one hour.

Line a baking tray with parchment paper and lightly brush the parchment with vegetable oil. Set the tray aside.

When the dough is ready, lightly flour your working surface and divide the dough into 8 equal pieces. Roll out each piece of dough into a 24-inch rope. Make a U shape with the rope and, holding the two ends, cross them over each other and  press onto the bottom of the U in order to form the shape of a pretzel. Place the pretzels on the baking tray and leave it at room temperature for 1 hour. This helps to dry out the surface of the pretzels and makes them easier to handle.

Preheat the oven to 450 degrees.

In an 8-quart saucepan, bring 10 cups of water to a boil. Lower the heat and slowly begin to add the baking soda to prevent overflowing. Bring the water back to a boil and add the pretzels, one at a time, to the boiling water for 30 seconds. Remove the pretzels from the water using a large flat spatula or a spider and put them back on the tray. Repeat the process with the remaining pretzels. The boiling will help to create a shiny, brown crunchy pretzel shell.

Beat the egg yolks with 1 tablespoon of water and brush the top of each pretzel. Sprinkle he pretzels with coarse salt. Bake the pretzels until they are a dark, golden brown, about 12 to 14 minutes. Transfer the pretzels to a cooling rack for at least 5 minutes before serving.

For the cheese sauce, in a saucepan over medium heat, bring the beer to a simmer. In a separate bowl, mix the Cheddar cheese and the cream cheese with the flour. Add the cheese mixture to the beer with the remaining ingredients. Stir until all the cheese has melted and the texture is smooth, about 5 minutes. Keep the sauce warm until you are serving.

I have to say the pretzels took a little bit of extra work, but they were worth it. The first batch I tried I had the water too warm, killed the yeast, and had to start over. The second batch I ended up having to add more flour to, about 2/3 of a cup, to get a dough that held together well. Once I did that, everything else went along according to the recipe. The pretzels came out great with a really good flavor that we all enjoyed. The recipe only makes 8 pretzels, so if you were planning for a party, you might have to double the recipe. As for the cheese sauce, I didn’t make it myself but it would seem to me that it would be a good sauce to use not just for pretzels, but for vegetables like broccoli or cauliflower, for tacos, nachos or any other time you want a cheese sauce. You could also use other things instead of salt to cover the pretzels, like a  cinnamon sugar, or some Parmesan cheese if you desire.

That’s all I have for today. Check back next time for some more recipes. I’ll be trying out some new slow cooker recipes this week, so keep an eye out for those. Until next time, enjoy the rest of your day and enjoy your meal! 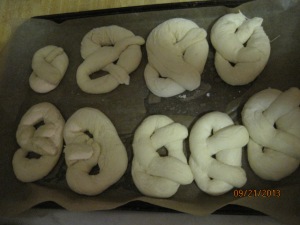