RSS
← The Easiest Chicken Noodle Soup You Will Ever Make
A Weekend Treat: Cinnamon Buns →

Better Than Delivery: Food Processor Pizza Dough and a Couple of Pizzas

Very often when I make pizza at home I use a store-bought dough to make life a little bit easier for me. I have bought the dough and sometimes a pre-made pizza crust so we can have a quick meal. Recently I came upon recipes both from Williams-Sonoma and America’s Test Kitchen that made pizza dough right in the food processor with minimal ingredients and no real kneading at all, making it very easy to make your own dough at home. I actually ended up combining the two recipes somewhat to make my own pizza dough for this one. The America’s Test Kitchen recipe used bread dough, which I liked, but made too many pizza crusts for me, so I combined it with the Williams-Sonoma recipe to get what I wanted.

In a small bowl, dissolve the yeast and sugar in the warm water and let stand until foamy, about 5 minutes.

In the bowl of a food processor fitted with the dough blade, combine the flour and salt and process with 3 or 4 pulses. With the motor running, slowly add the yeast mixture, allowing each addition to be absorbed before adding more. Continue processing until the dough forms a ball and cleans the sides of the bowl, about 1 minute, then process for 1 minute more.

Coat the inside of a large bowl with the olive oil and place the dough in the bowl. Cover with a clean kitchen towel and let the dough rise in a warm place until doubled in size, about 1 1⁄2 hours. Divide the dough in half and roll out as directed in the pizza recipe.

This recipe makes two 12-inch pizzas, which was perfect for my needs. It was very simple and didn’t take long at all. I was then able to move on to the pizzas. The first pizza I made was a simple cheese pizza, since that is all Sean really likes anyway.
Classic Cheese Pizza
1 Food processor pizza dough
Flour for the counter
1 recipe Pizza Sauce (to follow)
1 cup mozzarella cheese, shredded
1 tablespoon Parmesan cheese
Adjust an oven rack to the lower-middle position, place a baking stone on the rack and heat the oven to 500 degrees. Let the baking stone heat for at least 30 minutes.
Meanwhile, turn the dough out onto a lightly floured counter and shape it into a smooth, round ball and cover it with plastic wrap. Allow it to rest at room temperature for 20 to 30 minutes.
Uncover the ball of dough and stretch and shape the dough into a 12-inch round on a piece of parchment paper. Spread 1 cup of pizza sauce over the dough, leaving a 1/2-inch edge of dough uncovered. Sprinkle the mozzarella cheese and the Parmesan across the pizza to cover it. Lightly brush the edges of the pizza dough with some olive oil.
Slide the parchment paper and pizza onto a rimless or inverted baking sheet, then slide it onto the hot baking stone. Bake until the crust edges brown and the cheese is golden in spots, about 8 to 13 minutes.
Transfer the pizza to a cutting board, discarding the parchment paper. Cut the pizza into 6 or 8 wedges and serve.
I rolled out he pizza dough with a rolling pin instead of working it by hand. I just seem to have better luck working with the dough this way so I went with it, but do what you are most comfortable with. The crust came out great, though I probably kept the cheese pizza in for a minute or two too long as it browned a bit more than I would have liked, but Sean didn’t seem to care since he devoured all of the pizza. The pizza sauce recipe itself is quite simple:
Basic Pizza Sauce
2 tablespoons extra-virgin olive oil
2 garlic cloves, minced
1 (28-ounce) can crushed tomatoes
Salt and pepper
Heat the oil and garlic in a medium saucepan over medium heat until the garlic is sizzling, about 1 1/2 minutes. Stir in the tomatoes and simmer until the sauce is thickened, about 15 minutes. Season with salt and pepper to taste.
I made a second pizza, but decided to try things a little bit differently and went for a sausage and pepper pan pizza instead of using the baking stone.
Sausage and Pepper Pan Pizza
1 Food processor pizza dough
2 links Italian sausage, cooked and sliced
1 yellow bell pepper, seeded and cored, sliced thin
1 cup Basic tomato sauce
1 cup mozzarella cheese, shredded
1 teaspoon dried oregano
Adjust an oven rack to the lower-middle position and preheat the oven to 400 degrees. Lightly coat a 9-inch cake pan with 1 tablespoon of olive oil or coat the bottom of an ovensafe skillet with 1 tablespoon of olive oil.
Lightly roll the dough into a smooth ball. Roll and shape the dough into a 9-inch round and press it into the oiled pan or skillet. Cover the pan with plastic wrap and set it in a warm spot (not in the oven) until puffy and slightly risen, about 20 minutes.
Remove the plastic wrap from the dough and ladle the tomato sauce on the pizza dough, leaving a 1/2-inch border around the edges. Sprinkle the pizza with the mozzarella cheese and then top it with the sliced Italian sausage and the bell pepper. Sprinkle the top with the dried oregano. Bake the pizza in the oven until the cheese is melted and the sausage is browning around the edges, about 20 minutes. Remove the pizza from the oven and allow it to rest for 1 minute in the pan. Using a spatula, transfer the pizza to a cutting board and slice into the desired amount of wedges.
I really liked the thick crust that came out with the pan pizza and I love the sausage and peppers on a pie, so it worked out well for me. I actually used red, yellow and orange pepper on my pizza since I had some small sweet peppers on hand. Since Sean was full from eating the other pizza, There was plenty leftover so I can have some for lunch today.
That’s all I have for today. Check back next time for some more recipes. There is still plenty to come – a classic Chinese chicken takeout recipe, some oven barbecued ribs, cinnamon buns, and more. Until next time, enjoy the rest of your day and enjoy your meal! 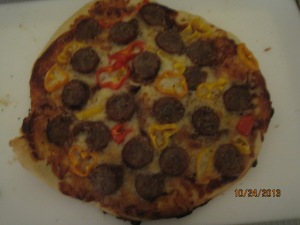 ← The Easiest Chicken Noodle Soup You Will Ever Make
A Weekend Treat: Cinnamon Buns →

6 responses to “Better Than Delivery: Food Processor Pizza Dough and a Couple of Pizzas”