Father’s Day dinner is always treat. Michelle and Sean get to do all the cooking and I get to pick out what I would like to have for dinner. I picked something simple this year since it was just the 3 of us. Michelle had picked up some New York strip steaks and we had some other things around the house that could make for a simple yet elegant meal. We thought about using the grill, but the weather was kind of iffy at the time we were eating dinner so we thought on the safe side we would just do it inside. The recipe for the steaks comes from Tyler Florence.

Remove the steaks from the refrigerator and allow them to come to room temperature. Heat 2 tablespoons of oil in a large sauté pan over medium-high heat until smoking. Sprinkle the steaks all over with salt and pepper. Put the steaks in the pan and cook, turning to brown all sides completely, until medium-rare, about 8 to 10 minutes depending on how thick the steaks are. Remove the steaks to a platter with tongs and cover loosely with a tent of aluminum foil to keep the meat warm while you make the sauce.

Put the sauté pan back over medium-high heat and add 1/4 cup olive oil. When the oil is smoking, add the mushrooms and cook, stirring, about 10 minutes, until golden brown. Add the thyme and the garlic, and season well with salt and pepper. Toss a few more times to cook the garlic, then dump the mushrooms out onto a platter. Take the pan off the heat, add the brandy, return the pan to the heat, and cook until almost evaporated. Add the cream and cook that down to 2 to 3 minutes until reduced by about one half and thickened. Return the mushrooms to the pan with whatever juices have collected on the platter and simmer the entire thing another 2 minutes until thickened again. Season with salt and pepper. Slice the steaks thin against the grain. Taste the sauce for salt and pepper and serve.

I loved the mushrooms sauce that came with the steaks. The steaks were cooked perfectly and the sauce added just the right amount of flavor with the mushrooms and the brandy. We did not have to pounds of mushrooms on hand, so we actually ended up about halving the recipe and cut down the amount of olive oil used to about 2 tablespoons and cut the brandy down to about 1/8 of a cup and the heavy cream to about one-fourth.

Besides making some corn on the cob to go with the steaks, we also used a recipe from Bobby Flay of the Food Network for grilled sweet potatoes with lime and cilantro. Even though we didn’t actually grill the potatoes, I think they still came out pretty nicely for indoor cooking. It’s very easy to make this recipe and takes next in no time at all.

To par-cook the potatoes, place the potatoes in a large pot of water and boil until fork tender, about 8 minutes. Allow the potatoes to cool completely. Slice each potato lengthwise into eighths.

Preheat the grill to medium or place a cast-iron grill pan over medium heat. Mix 1 tablespoon of salt, the lime zest and the cayenne pepper in a small bowl and set aside.

Brush the potato wedges with the oil and season well with salt and pepper. Grill the potatoes until they are golden brown on all sides (including the skin) and just cooked through, about 1 1/2 to 2 minutes per side. Transfer the potatoes to a platter and immediately season with the salt mixture and sprinkle with cilantro.

We simply made the potatoes in the cast-iron pan instead of dragging the grill pan out and I think they turned out just as well. Par-cooking them is really necessary here because you want to make sure the potatoes are going to be cooked all the way through when you make them this way. If you just put them in raw, they are not going to be done in one to 2 minutes and will burn. I really liked the mixture of the lime and the salt with the cayenne pepper; it really help to bring out the flavor of the potatoes and I actually used some of the salt on my piece of corn on the cob as well.

That’s all there is for today. Next time I will post the recipe Michelle used to make banana cream pie for dessert for Father’s Day. I can tell you it was pretty darn good and I really enjoyed it. Check back for that one as well as some of the recipes that I have done recently and plan to post on the blog. Until next time, enjoy the rest of your day and enjoy your meal! 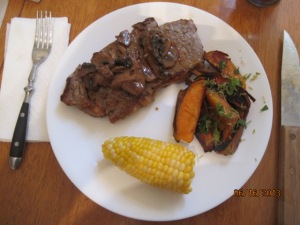