Just before Thanksgiving came around I had a turkey that I had purchased at the supermarket. Even though we weren’t going to be home for Thanksgiving, it’s hard to pass up a bargain when they’re selling fresh turkeys for $.79 a pound so I picked up one and decided I would make it after Thanksgiving and try a different approach with a new recipe. I had seen before Thanksgiving recipe from Food Network that was made by Bobby Flay for a roast turkey with mustard maple glaze that sounded delicious and looked relatively easy to make. It incorporated some different ingredients to make the glaze, such as maple syrup, horseradish, Dijon mustard, and chili powder. There was also a nice gravy that went along with it, so I decided this was going to be the one to give a try to, and I’m glad I did.

To make the glaze: Whisk the maple syrup, mustard, horseradish and chile powder in a bowl and season the mix with salt and pepper. Cover the mixture and let it sit at room temperature at least 30 minutes to allow the flavors to meld. The glaze can be made up to 2 days in advance; store the glaze, covered, in the refrigerator. Bring it to room temperature before using.

Remove the turkey from the oven and transfer it to a large cutting board. Tent the turkey loosely with foil and let it rest at least 45 minutes before slicing. Strain the drippings into a bowl and discard the solids. Add enough of the remaining chicken stock to make 6 cups of liquid.

To make the gravy: Melt the butter in a medium saucepan over medium heat. Whisk in the flour and cook until the flour is light golden brown, about 8 minutes. Slowly whisk in the stock-drippings mixture, then bring the mixture to a boil and whisk until the gravy begins thickening and the flour taste has been cooked out, about 10 minutes. Add more stock until you reach the desired consistency. If desired, add a splash of white wine and cook 2 more minutes. Stir in the herbs and season with salt and pepper to taste.

To serve, reheat the remaining stock in a saucepan over low heat. Remove the legs and wings, then remove the dark meat and shred. Remove the breasts and cut crosswise into 1-inch-thick slices. Place the meat on a platter and ladle some of the warm stock on top.

I think this recipe was fantastic. The glaze that was on the turkey made the skin perfectly brown and gave it a nice taste. The combination of the mustard and the maple syrup along with the horseradish, really did it for me. The original recipe uses 17 pound turkey so quantities are quite high. The turkey I bought was only 11 pounds so I cut the recipe by about one-third when I was making it. I think if you have a large bird, even bigger than 17 pounds, this recipe would work out pretty well. The meat was perfectly cooked and everything came out nice and juicy. Everyone seemed to really like the gravy as well. This is definitely a recipe that I will use again. 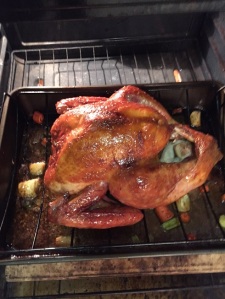